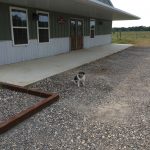 Kurten Veterinary Clinic was established in 1994 by Dr. Jimmy Lloyd.  The original practice was located in his parent’s remodeled 1970s home. He was joined by Dr. Henry “Bucky” Blazek until
2006 when Blazek retired. The clinic was closed briefly in 2006 when Dr. Lloyd experienced medical complications after falling while on a farm call. He resumed business later in that same year and gradually increased his workload. In the spring of 2007, Dr. Lloyd met Dr. Kim Hendrick at a local veterinary meeting. She immediately began working with him.  In 2009, Dr. Hendrick purchased the practice from Dr. Lloyd. Ground was broke in 2014 for the purpose of building a new facility.  The new building officially opened in August of 2015.